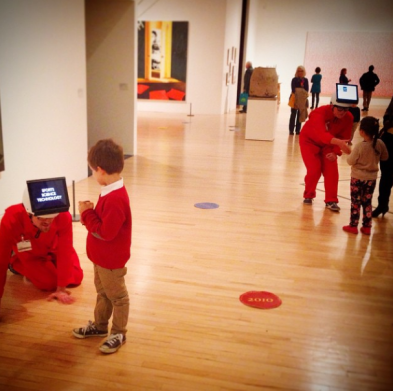 The Tate holds the national collection of British art from 1500 to today as well as major collections in international and contemporary art. The Tate is comprised of four separate physical locations at the Tate Britain, Tate Modern, Tate Liverpool, and Tate St. Ives. The website tate.org.uk aggregates information about all locations and their programs and collections, and hosts the museums’ content-rich sections about Learning, Research, and Art and Artists. A Blogs and Channels section brings together photos, video, blogs, and news. Finally, “About” contains comprehensive information about all aspects of the Tate’s operations, including evaluation, financial reporting, and strategy documents.

The Tate’s digital innovations are longstanding and continuous. It was an early adaptor to digital technology and has maintained its leadership position. In a 2013 strategy paper titled, Digital as a Dimension of Everything, the Tate defines its vision, principles, and content strategy, calling for use of digital technology to foster discussion and interaction. The Tate’s strategy is to pursue, stimulate, and convene conversations. Further, Director Sir Nicholas Serota said in 2009 that, “Those institutions which take up this notion fastest and furthest will be the ones which have the authority in the future.”

To spur these conversations the Tate is active on more than 40 social media accounts including multiple feeds on Twitter, Facebook, YouTube, Instagram, Tumblr, Pinterest, and others. With 3.4 million Twitter followers, nearly 2.34 million on Google+ and almost 1,016,000 Facebook fans, the Tate’s digital reach is among the largest of arts institutions globally. The Tate’s social media presence often takes a “serious fun” approach, such as the recent robot’s tour of the Tate Modern After Dark, for which randomly selected virtual audience members could control in-museum robots to create museum tours, while thousands of people watched from their personal computers and mobile devices. The Tate began Twitter tours of museum exhibitions last year, giving curators the opportunity to interact globally with digital audiences who could see and learn about an exhibition by following along.

The Tate also develops educational content for students of all ages, in person and online. Beyond rich online interpretive material about artists, collections, and exhibitions, the Tate creates curricula, provides training and workshops for educators and museum professionals, and sponsors lectures, podcasts, and interview programs all aimed to enrich audience experiences. Internationally the Tate sponsors BP Art Exchange, a global online learning project connecting schools in over 60 countries with galleries, artists, and cultural institutions worldwide. The Exchange allows participating members to connect, share ideas, and display creative projects with each other and fosters the exchange of information and ideas about art and artists.

The Tate’s Digital group has embarked on a project to build the digital skills of staff across the organization in order to further embed digital practice. Training in subjects like writing for the web, using analytics, and interacting in social media reached two dozen people over the course of a few months. The goal is to distribute content development and audience engagement expertise in all departments, and to help foster the strategy of “digital dimension of everything.” Training will also convey the principles and practices that can help staff deliver consistently high-quality editorial, visitor experience, and brand standards across the Tate’s digital properties.

Following the Tate and reading its annual report, evaluation conclusions, and digital strategy documents is a requirement for understanding excellence in digital practice among cultural institutions. Its digital programs are exemplary in every respect.