How cultural institutions are embracing digital technology
Commissioned by the Wyncote Foundation
Chicago, IL
Using the public square as its metaphor for audience engagement, Steppenwolf Theatre has built robust digital content to inform and elevate the conversation it can have with audiences and the public. 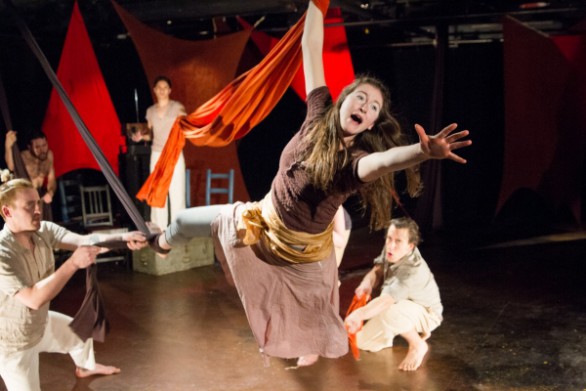 Chicago, IL
Using the public square as its metaphor for audience engagement, Steppenwolf Theatre has built robust digital content to inform and elevate the conversation it can have with audiences and the public.

Steppenwolf Theatre was formed in 1976 by a group of actors who dedicated themselves to an ethic of mutual respect and to the development of artists through ongoing group work. The Steppenwolf ensemble now has grown to 46 artist-members including actors, directors, playwrights, and filmmakers, and remains devoted to its original vision as an artist-driven enterprise. Defined as “where great acting meets big ideas,” Steppenwolf’s mission is “to engage audiences in an exchange of ideas that makes us think harder, laugh longer, feel more.” It is America’s longest-standing ensemble theater, and winner of 12 Tony Awards and the National Medal of Arts. The Theatre has presented over 65 world premieres.

Strongly rooted to its home in Chicago, Steppenwolf built its own multi-theater complex in 1991 on the city’s North Side. It recently announced expansion plans for the site. There the company presents its mainstage season focused on new works or second productions of recent premieres. Also on campus is Steppenwolf for Young Adults, dedicated to plays for young people, families, and teachers; the School at Steppenwolf, offering training for working actors in Steppenwolf’s ensemble techniques; and Garage Rep, a mentorship and production support program that invites Chicago’s most innovative storefront theaters to develop and present work under the Steppenwolf banner. In recent years, Steppenwolf has annually produced around 700 performances and events in its three on-site theater spaces for audiences of about 200,000.

Over the past ten years, Steppenwolf has received major grants from the Doris Duke, Mellon, and Wallace foundations to understand, engage, and expand audiences. Affected by the national trend that shows subscription levels waning, Steppenwolf has expanded its audience service and engagement efforts to create deeper relationships with subscribers and single ticket buyers and thereby boost attendance. Leaders have re-conceived the Theatre as a “public square,” a creative environment that engages people in an exchange of ideas through artistic experiences. To support this orientation, Steppenwolf creates in-person events like post-show discussions after every performance; community partnerships with neighborhood and social service organizations; and ancillary programming like concerts aimed to bring non-theater-goers into the building for the first time. To identify Steppenwolf as the convener of some 200 annual events that reflect the public square metaphor, Steppenwolf invested in a complete overhaul of its visual identity so that separate programming components — some designed for highly targeted audiences — would be easily distinguished as belonging to the Theatre.

Digital media plays an important role in the public square at Steppenwolf. The Theatre’s website has been completely redesigned to communicate the new brand identity in black, white, and red. Distinctive photography and video provide compelling visual content, offered on platforms that support audience interaction and sharing. The Theatre has developed blogs, podcasts, and video interviews; has digitized its program book; and is active on social media.

Steppenwolf’s productions are more difficult than some to deploy digitally. With new work as the Theatre’s primary output, the timing of publicity and information-sharing around performances is challenging because the ink is still wet on the page. While new work is in development, actors and writers are not always willing to invite audiences behind the curtain. This means the production and promotion of the work have to be done simultaneously.

As a creative work-around, Steppenwolf’s digital team began producing “trailers” for new plays that mimic movie trailers. These videos evoke a play’s themes and use actors actually working in the cast, but are not live tapings of work-in-progress. The trailers capture the tone and suggest the content of a production. They’re short, like movie trailers, and can be created early in a production cycle when actors begin the 6-to-8-week rehearsal period. Trailers are posted on YouTube and on the Steppenwolf website; the link is emailed to subscribers and shared via social media. When combined with typical press releases, these trailers give personality and substance to new works that words cannot. “They are meant to position the viewer to be ready to see the play,” said videographer Joel Moorman.

Moorman also creates a video for each production based on audience interviews in the lobby during the first performances. Clips from these interviews are combined with quotes from reviews, and then pushed to audiences via email and social media. These interesting and popular videos alert audiences that a new play has launched, and offer reasons to attend in the audience’s own voice.

Steppenwolf is collecting its video, photography, podcasts, and blog postings in a single area of the website called Watch and Listen. Users can search the collection by production, ensemble member, and season to find both historic and recent documentation. The archived content provides an increasingly deep repository of the Theatre’s history and allows digital sharing of each element. Visitors can also subscribe to material via YouTube, iTunes, RSS feed and various other services. The archive helps actual and potential audiences learn more about plays before or after they attend. It also helps the many theaters that later perform their own versions of Steppenwolf premieres to learn about the original production. All of these efforts are helping Steppenwolf attract a growing social media audience.

Executive Director David Hawkanson said Steppenwolf views digital media offerings as “an enhancement of the conversation we are having with our audience.” Whether a new work succeeds fully or not, “We want the conversation, and this gives us one way to have it.” He added that, “Digital started as an isolated effort but we realize now that good content production involves everyone.” Because Steppenwolf’s staff is lean, leaders also need to be sure that content elements can be used for many purposes. So far, grants have generated all of the revenue for digital content, but that level of support is unlikely to continue. Steppenwolf leaders expect that some marketing costs will gradually shift from traditional print publications and broadcast to digital platforms.

Digital Content Producer Moorman sees his job as producing work that reflects the creativity, brand, style, and energy of the work on stage. “It also has to be fun and exciting if we want people to see it and share it,” he said, citing digital users’ short attention spans. As for metrics he looks to “time on site” (how long audiences spend on Steppenwolf’s website), and the number and quality of visitors’ comments. Steppenwolf also tracks on-line ticket sales, “last point conversion” (the last thing users did before they made a purchase decision on-line), and digital-only promotional offers. These measures are based not just on consumption of the content, but also on engagement with it.

Leaders at Steppenwolf cite three barriers to their digital work. First, “letting go of information” is a challenge. The organization has needed to analyze its workflow more closely to help digital producers identify the employees who have information that would enhance audiences’ experiences. Also, knowing who has authority to speak about a new play and what language to use requires constant discussion – it can be hard to talk about something that doesn’t yet exist. Second, the sheer volume of work facing Steppenwolf’s lean staff makes it more difficult to innovate, since innovation is so often a time-consuming process. Finally, the background and training of individual workers shapes their capacity to “think digitally.” Steppenwolf’s digital producers need trusting relationships and continuous conversation with the ensemble in order to honor artists’ preferences about what is possible and appropriate to share publicly.

Steppenwolf continues to grow and evolve, organizationally and artistically. Recently the Theatre announced a complete and simultaneous generational shift in leadership including a new artistic director, managing director, and board chair. These leaders inherit an impressive artistic legacy and an increasingly innovative approach to audience and public engagement.