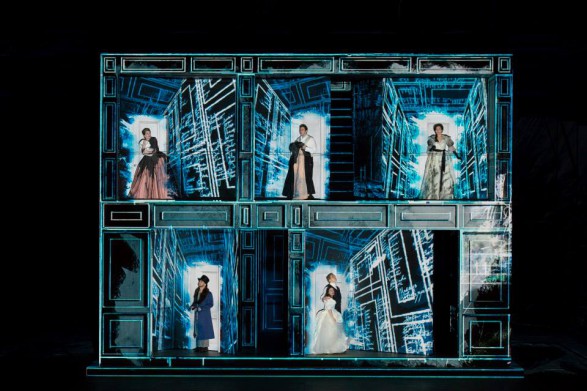 The Royal Opera House is home to the Royal Ballet and Royal Opera; both of which are exploring multiple avenues for digital audience engagement. During the 2014-15 season, a total of seven operas and four ballets were transmitted live from the ROH to over 1,500 cinemas in 40 countries. Launched in summer 2014, The Opera Machine, uses 17 different camera angles and 3 sound mixes to give audiences a glimpse into the precise and complex behind-the-scenes work involved in staging Act III of Wagner’s Die Walküre. On October 1, 2014, the Royal Ballet initiated World Ballet Day, an online event capturing 20 continuous hours of live streaming from five renowned ballet companies around the world. Leading up to the event, viewers were invited to upload videos of themselves completing a pirouette, and were then offered a free copy of the event’s digital program book. Audiences wanting to dig deeper into either the Ballet’s or Opera company’s productions can access educational content on ROH’s iTunes U page, join their large Facebook following, delve into online educational resources, and rent or buy productions from the on-demand service, Digital Theatre. Also possible, a night at one of the ROH BP Big Screens program, which offers popular operas in large outdoor venues, free to the public.

Discussing possibilities to come, Tom Nelson, creative producer in Learning and Participation at the ROH, spoke to the one of the organization’s core focus areas: “to find new ways of opera and ballet speaking to an increasingly digitally aware audience.” At its Covent Garden home, ROH has begun its major architectural and infrastructural overhaul Open Up, with project information shared  online.